Gem Diggers is a Bible-based boardgame for the whole family. It is designed primarily for Jehovah’s Witnesses. The game is played using a quad-fold board, 3 decks of cards based on three unique categories, a 60-second timer and hand-crafted tokens to indicate movement around the board.

Gem Diggers will provide wholesome entertainment for family and friends. It's an engaging, fun and interactive way to instill an even deeper love for the many spiritual gems in Jehovah’s word. The game will also help you to memorise important Bible verses. We know that you will enjoy it with fellow believers, whether used during Family Worship, social gatherings, or other upbuilding activities!

Can be played via Zoom during social distancing!

Some videos of friends from around the world enjoying the game (incl. Zoom footage)
[ MORE VIDEOS ]

WHAT THE FRIENDS SAY

Read what friends from around the world say about us.
[ MORE COMMENTS ]

Hi David. Congratulations on developing a really excellent board game. I enjoyed playing it and really like the way it stimulates the players to think about spiritual matters in a fun way. Well done!

We played the game over the weekend and had such a laugh. And so many interesting facts that prompted further research - thank you my brother for this wonderful gift!

We received our game yesterday and can't get over how beautifully made it is!! The quality of the materials used is outstanding!! It has definitely been worth the wait - we really appreciate it!!

Good morning David, just want to say thank you for the wonderful boardgame you have created. We played it a number of times with our brothers and sisters here in Knysna. I really appreciate your work and research, we have also enjoyed doing additional research because of the game - such a great, fun way to learn about Jehovah!

Hi David, hope you're well? Just wanted to let you know the game is HUGE hit! We've just had our Circuit Visit and played it at a gathering with many, many laughs!! I've had a request from my cong to get another 2 board games. Thanks again!

Click on the expanding buttons below for more info on each section.

Gem Diggers is a theocratic board-game, designed to stimulate quick and creative thinking. Players are challenged to describe, act out and answer clues or trivia questions within a sixty second time limit. The game is split into three categories and covers a broad range of subject material. This includes biblical characters, events, places and theocratic terms. The game is also geared toward memorizing important Bible verses.

Preparing to play the game

Determining the teams and starting the game

You may not use any of the following:

Click on a circle below to see a bigger screenshot 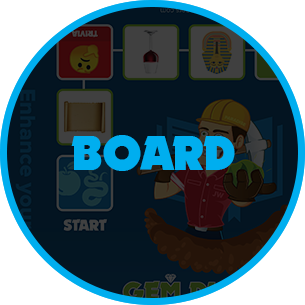 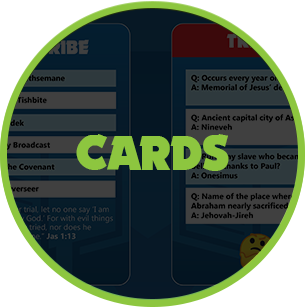 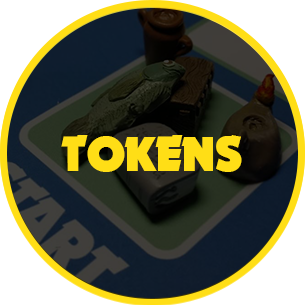 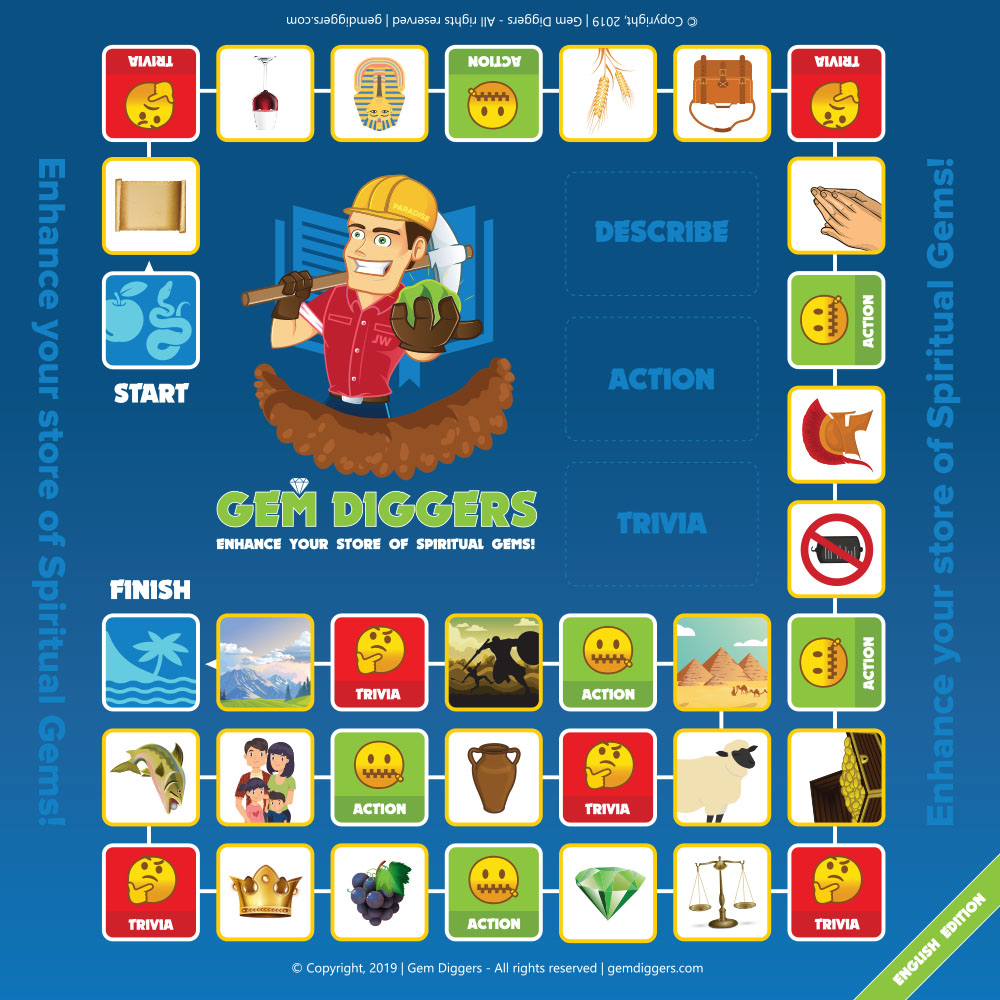 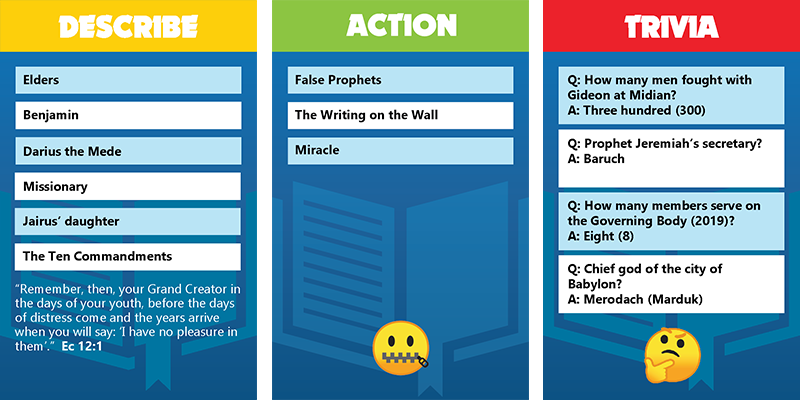 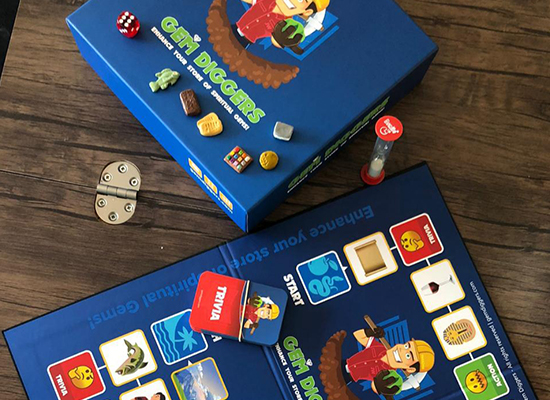 The idea for Gem Diggers originated when a group of friends got together for a Group Family Worship project and decided to create a boardgame based on Bible Knowledge / Trivia. We designed the board, had it printed but left the squares blank, with the idea being for the more artistic among us to colour these in on the day with various images associated with the Organization.

Each person would write down 10 ‘clues’ which were words or phrases from the bible, publications or other Organizational material. We divided into teams, and each team was represented on the board by a hand-made clay polymer ‘token’ (miniature objects / artefacts). One person in each team would try to describe these words / phrases without saying the actual words, while the others would try and guess. The teams would advance around the board based on the amount of described clues correctly guessed.

We had so much fun with this game that a few of the friends suggested I create a 'proper, professional' version for friends around the world to play. Using my background in design and web development, I created the game you are reading about now. It has evolved slightly since its genesis, but the object has ever been the same: To provide all those who love Jehovah with a fun, interactive and engaging way to 'enhance your store of spiritual gems!'

Please Note: All clues have been meticulously researched!